Reason why you should use Node.js for Web Development

As innovative technology continues to conquer the industry, more startups join the organization and try their best with the upcoming revolution. When considering the building of a new application, it might be a good idea to include Node.js as a key part of web development. It is known that whenever there is a new trend in technology, the IT industry goes crazy about it for the very first few months of but Node.js stands the latest as an exception. Node.js provides you additional speed that can be used on several platforms. It is also an active community that can be beneficial to get modules and any other assistance. Node.js outshines other web development platforms by substituting web sockets with innovative push technology. We should know that what is unique about Node.js? Node.js is a cutting-edge application with two sides, real-time communications where both the server and client can establish a connection, allowing them to exchange valuable information and data. This is a simple contrast to our conventional application response paradigm, where it starts only when the client initiates the communication.

Summary show
1 What is Node.js?
2 Extremely Fast – Since it is built on chrome’s JavaScript engine, the library is swift for executing the code.
3 Asynchronous and Event-Driven – APIs of Node.js are asynchronous means it is non-blocking.
4 Free License – it is totally free since it is released under MIT license
5 Why Node.js?
6 JavaScript everywhere
7 Speed
8 Solves Database Queries
9 Conclusion

Node.js is a server-side platform that Ryan Dahl developed in 2009. It was built on Google chrome’s JavaScript engine for fast and scalable network applications. It uses a non-blocking, event-driven I/O model that makes it resourceful, lightweight, and perfect for the real-time application that runs across the distributed device. Node.js is also an open-source, cross-platform, and runtime environment for developing server-side network applications, which can be run on Microsoft Windows, Linux, and OS X. It is based on a non-blocking I/O model due to its asynchronous functionality, which keeps the server busy instead of waiting for data to be returned before being able to move on to the other task. Node.js also provides a rich library, having various JavaScript modules that solve web application development’s complexity using Node.js to a great extent.

Extremely Fast – Since it is built on chrome’s JavaScript engine, the library is swift for executing the code.

Asynchronous and Event-Driven – APIs of Node.js are asynchronous means it is non-blocking.

Here the best part is that a Node.js based never waits for an API to return data. The server moves to the next API after calling it, and a notification mechanism of Node.js helps the server to get a quick response to the call of the previous API, which also makes it fast in execution. 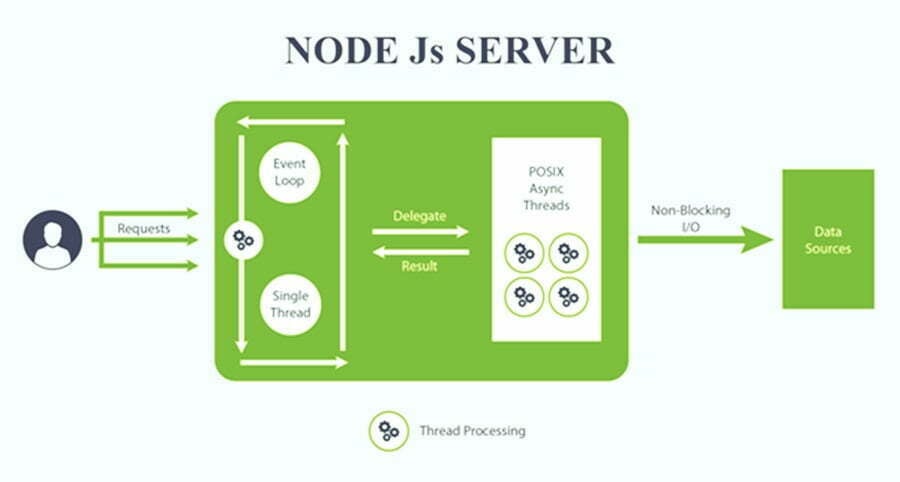 Single-Threaded and Highly Scalable – Node.js uses a single thread model with the event loop. Event notification system helps the server to respond in a non-blocking way that makes the server highly scalable as compared to other servers which generate a limited thread for handling the request code since it uses a single thread program that can offer service to a large number of request than the other server like Apache Tomcat server.

No Buffering – Node.js reduces the overall processing time while uploading heavy files audio and video files because it never buffers any data. All the applications output the data in blocks.

Open Source Platform – Node.js is an open-source community which has delivered numerous type of excellent modules to add further capabilities to which is a good thing for a Node js development company.

Node.js development has numerous advantages for both developers and the resulting applications. Its high performance and scalability and sh, ort app development cycles attract you enough; it’s time to adopt Node.js in web development. Here are some reasons that will convince you to use it.

Node.js uses JavaScript everywhere, and that’s the biggest reason for its popularity. JavaScript is listed as the most popular programming language, enabling event-driven programming to the web servers via an extremely fast JavaScript interpreter that only runs in Chrome browser. Java Script is the only option to develop applications in the Chrome browser. With Node.js, JavaScript has truly revolutionized on the server. The language is common to most web developers and certainly driving the industry successfully.

Node.js provides better speed than PHP website in many cases. Firstly, it is primarily a JavaScript runtime powered by the V8 engine, which can compile and execute the code in a fast manner. In addition to this, it uses non-blocking asynchronous behavior can cut down the time it takes since things can continue in the background while the user moves on to other tasks.

The database queries for MongoDB, CouchDB supports JavaScript framework. There is no need to modulate the syntax differences while combining the Node.js and NoSQL databases.

Node.js is the best choice for real-time web apps because it has all the features you need, and it delivers fast execution, better performance, and excellent results. This framework is also great for building APIs and handles all the requests that are I/O model based. Node.js is your key to the door of successful development, so Include Node.js in your web development future.